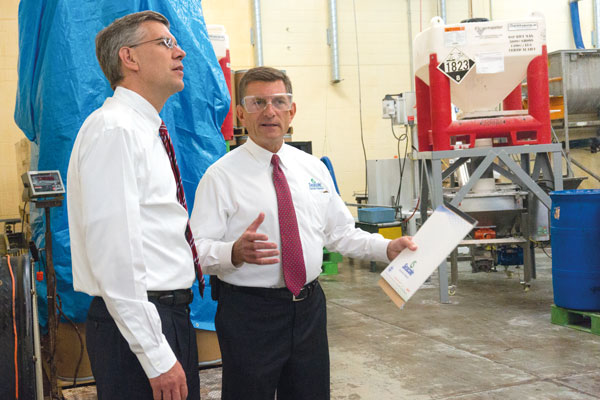 From the December 2016 Issue of Enterprise Minnesota

“Gregg Elliott is more than candid about the pragmatic motivation behind his company’s decision to pursue its ISO certification.

“It was, to be honest, a customer-driven process,” he told a room full of manufacturing executives recently, at an event in Maple Grove, organized by Enterprise Minnesota at Great River Energy. Elliott was one of three CEOs who described their ISO journeys. Other presenters included Tom Murphy, president of CARDSource, and Sarah Richards, president and CEO of Jones Metal.

He had long studied the way ISO could institutionalize processes, reduce mistakes, and better exploit the capabilities of his ERP system. Yet the ultimate tipping point for his decision to take on ISO, he told event attendees, was prompted by a tip in 2013 that executives at Dow Chemical wanted to sub-contract a considerable chunk of work to Seacole—but only after the company achieved its ISO certification.

Similar subcontracting has long driven part of Seacole’s enviable profitability, because many manufacturers would rather avoid the costs and regulatory hassles of managing in-house chemical packaging operations, especially when those processes are only incidental to their primary business. Chemical manufacturers are among the most closely regulated American industries, with the DEA, the EPA, Homeland Security, Pollution Control Agency, and a host of others continually keeping tabs on their products and processes.

“Everybody watches us,” Elliott said.

After canvassing an assortment of consulting organizations, Elliot and his managers chose Enterprise Minnesota to guide their path to ISO certification.

“We looked at a lot of other options, to be honest,” Elliott said. “You can go online and almost get a mail order ISO program. You send them a bunch of information, they send you back a bunch of information, SOPs, and then you go through your certification. It’s very easy and pretty cost effective, but you really don’t get much out of it. You really don’t improve your company doing it that way.”

After waiting out a year-long delay while Seacole first upgraded its powerful ERP, Enterprise Minnesota’s Kent Myhrman used three-hour bi-monthly sessions for about a year to guide them through several other related projects, including job instruction training.

“It wasn’t the huge time commitment we were expecting,” Elliott said.

Seacole’s hard cost of achieving ISO was about $23,000, according to Elliott, along with $10,000 to account for another 708 hours’ worth of employee time over the year.

The annual time and labor expense of maintaining ISO is under $50,000, he added.

“The return on investment calculation is certainly in our favor,” Elliott said, emphasizing that some of that expense was baked into existing employee responsibilities.

“We were doing all that stuff to begin with,” he said. “We had a complaint system, and we had a corrective action system, but they weren’t very well formalized and documented. Those people were all in place and already doing those functions, just not doing them very efficiently.”

Seacole became ISO certified in October 2015 and since then has notched close to $2 million in annual revenue from the Dow relationship, with more coming, according  to Elliott.

Elliott readily admits that the ISO disciplines have accomplished much more than good sales at Seacole.

The ISO process used inter-department cooperation to develop greater efficiencies, which also “really empowered our employees,” Elliott said. “We’re making fewer mistakes, and we’re not repeating them, which is even more important. In an era when employee retention is a top priority, the ISO process gave them a feeling that they were part of the process. It really helps us retain the employees we have.”

“Every visitor, customer, and employee who enters the building understands what we’re all about,” Elliott said. “It’s something that we live on a daily basis.”

Elliott said ISO certification also enabled Seacole’s entrance into the National Association of Chemical Distributors, a large national association whose members move about 90 percent of the chemical products in the United States. That membership, he said, opened the door to a new customer relationship with BASF, the world’s largest chemical producer.

“We’re growing at a clip of between 10 and 12 percent a year right now, and I think it’s largely because of our ISO,” he said.”

It’s Not Just for Compliance Anymore

Thinking Outside the Drum: What Can Seacole Specialty Chemical Do for You?
Scroll to top